About ServiceMaster Restore of Kamloops

We are highly trained and equipped to serve you!

ServiceMaster Restore of Kamloops' technicians are the most highly trained in the industry to respond quickly to any emergency, day or night. Each specialist is equipped with industry-leading technologies and techniques to provide your home with top quality restoration services, whether you’re dealing with water in your basement or fire and smoke damage in your kitchen. It is our goal to communicate with you throughout the process to provide the best possible customer service experience.

ServiceMaster Restore of Kamloops is a definitive disaster restoration expert, specializing in effective, quality repair of homes and businesses following any unfortunate event. We work closely with your insurance company professionals to ensure your property is restored quickly, efficiently and with care. 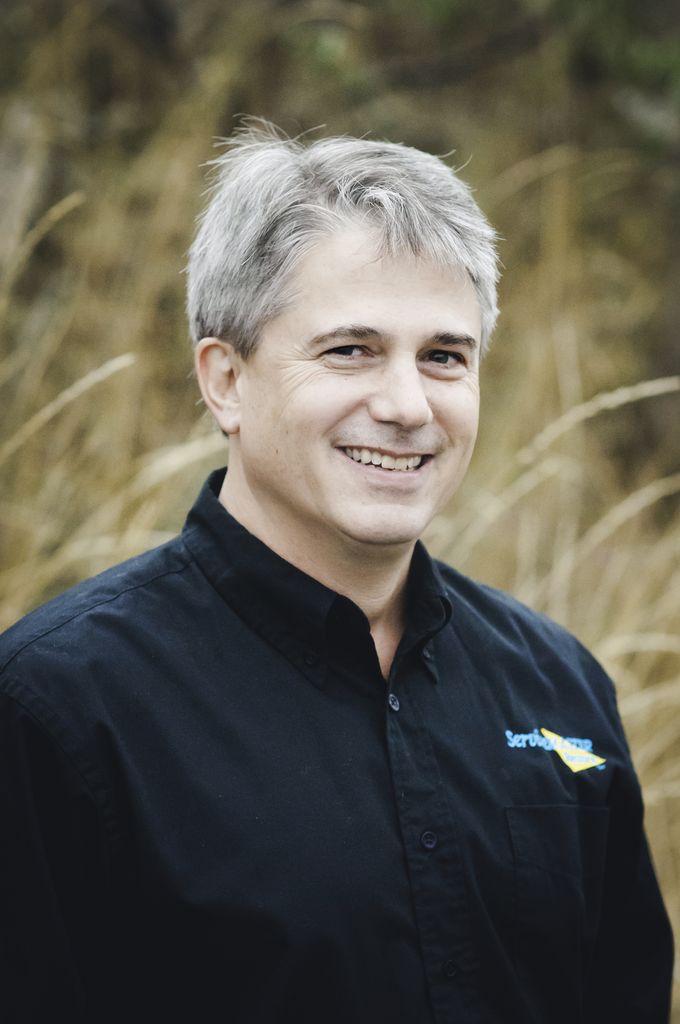 Greg Buffel has been the owner and manager of ServiceMaster of Kamloops since 1993, building the company from the ground up. Greg has been directly involved in all aspects of the business and has worked hard to maintain the very highest of industry stand-ards. Greg has grown the company from 1 employee with a van to over 40+ employees and 19 service vehicles. He believes that the success of the company has been built on our mission statement and treating every customer with empathy and respect.
Greg’s work experience and qualifications include:
 Master Restorer designation from the IICRC in both Water Restoration and Fire and Smoke Restoration
 Bachelor of Science degree from the University of Calgary majoring in Actuarial Science
 Graduate of ServiceMaster’s Academy of Management
 Over 30 years of construction experience
 Entrepreneur and business owner for over 25 years
ServiceMaster Business Awards
 Received Bronze, Silver and Gold Hammer Awards
 Received Largest % Growth in Canada, 2008 and 2012
 Received 2 President’s Achievement Awards
Greg’s family includes his wife, Wendy, his son, Brian and their dog, Cooper who is a regular at the office. When not working, Greg enjoys the outdoors and is an avid skier, mountain biker and boater. Before moving to Kamloops in 1993, Greg had regularly visited the region and has spent annual vacations in the area since 1970. He loves the Kamloops area and there is nowhere he would ra-ther live. 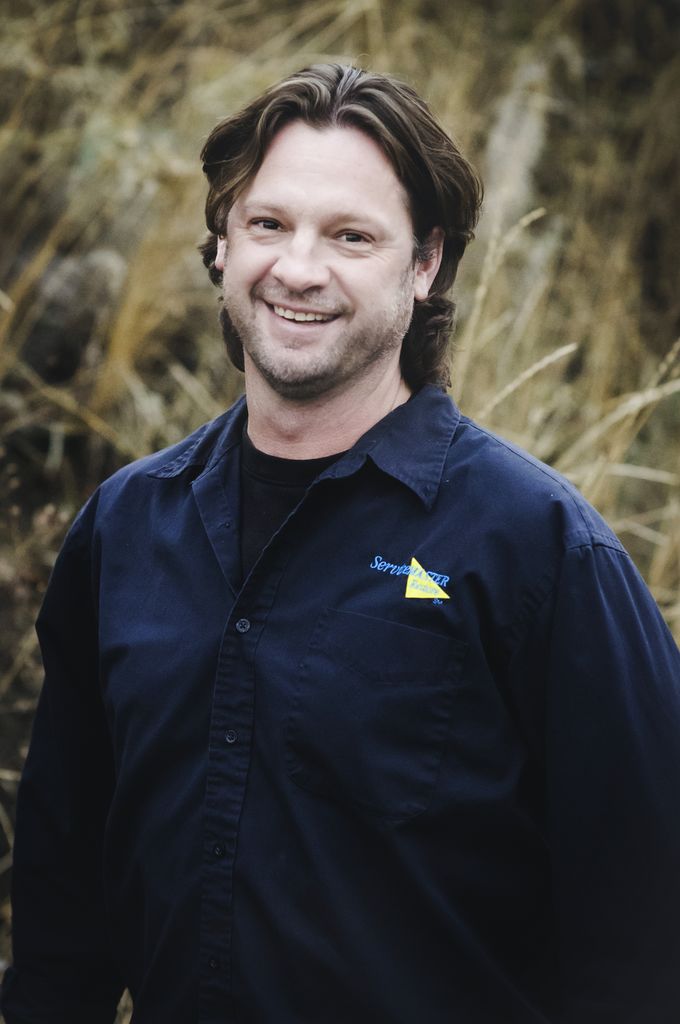 Kevin Lukey has been with ServiceMaster since 2008 as a Project Manag-er as well as managing marketing and special events. Kevin enjoys his work as ServiceMaster of Kamloops’ liaison with Insurance Company representatives. Since Kevin started with ServiceMaster he has seen the company expand into new markets and triple in size. Kevin’s related work experience and qualifications include:
 Water Restoration Technician
 Fire and Smoke Restoration Technician
 Asbestos Awareness certification
 Workplace Hazard Awareness certification
 20 years customer service experience
Kevin and his wife, Edie have been living in Kamloops for 8 years with their 2 children. Kevin is active and enjoys a variety of sports, both play-ing and watching. He loves spending time at the lake, and most recently he has added fishing to his list of hobbies. 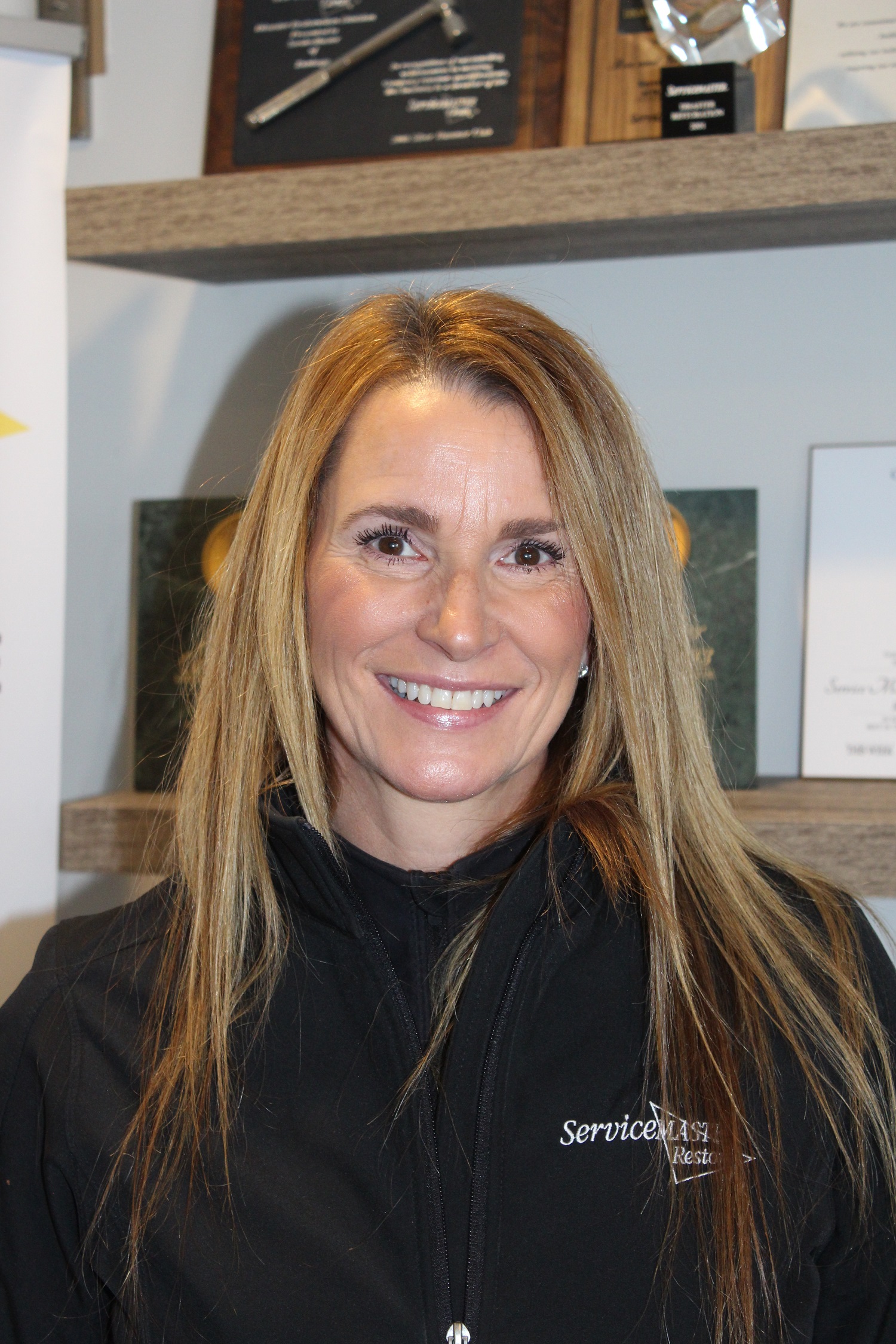 Kim is new to ServiceMaster. Along with 6 years of experience in Carpet Cleaning she brings to the ServiceMaster family her 3 adult daughters, 1 adult step son and recently retired Kamloops Fireman husband.

The former owner of Kamloops Classic Carpet Care is credited with:

Kim has excellent communication skills, she is a very outgoing & friendly person who has taken on the repsonsibility of managing our Contnet & Cleaning Department. 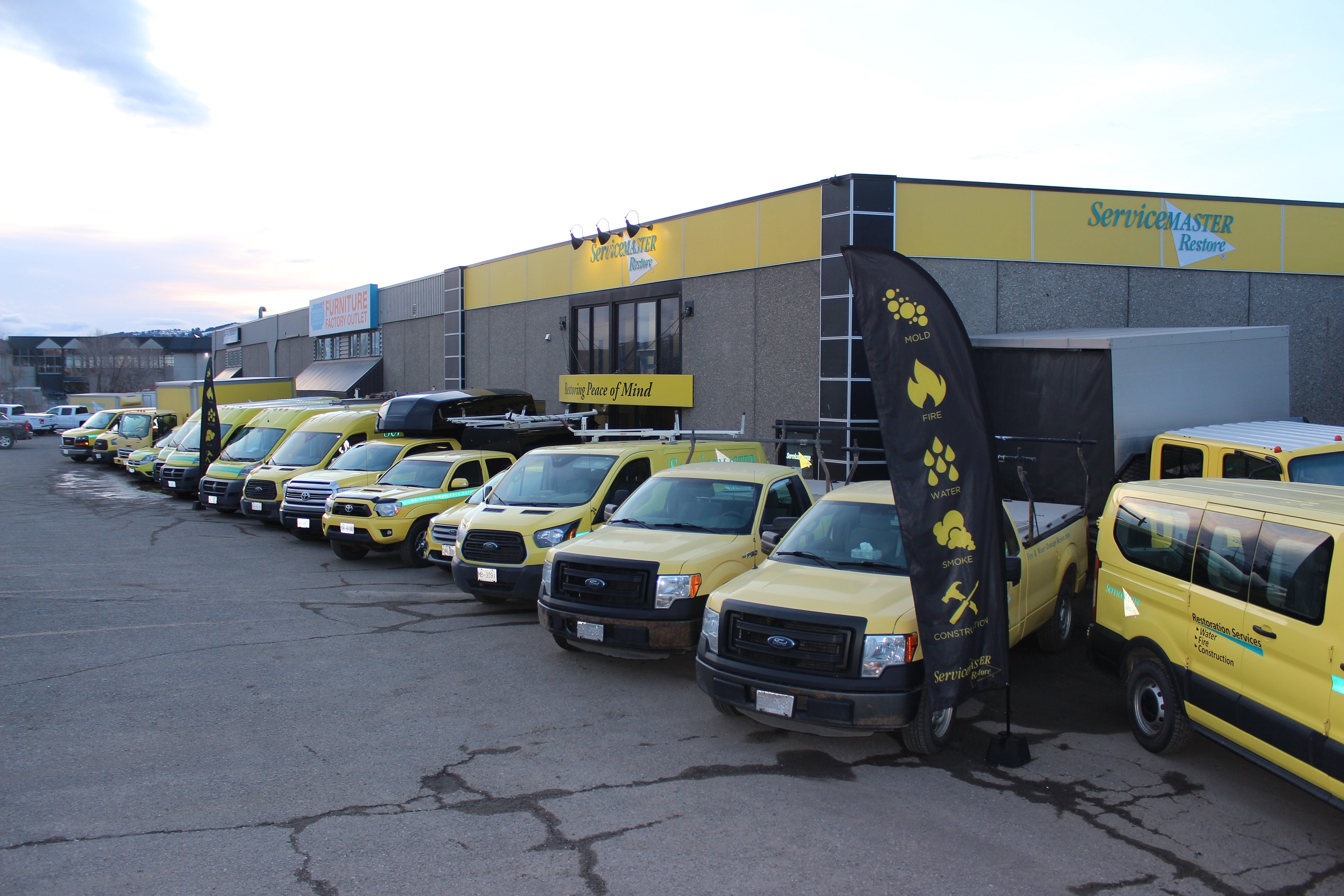 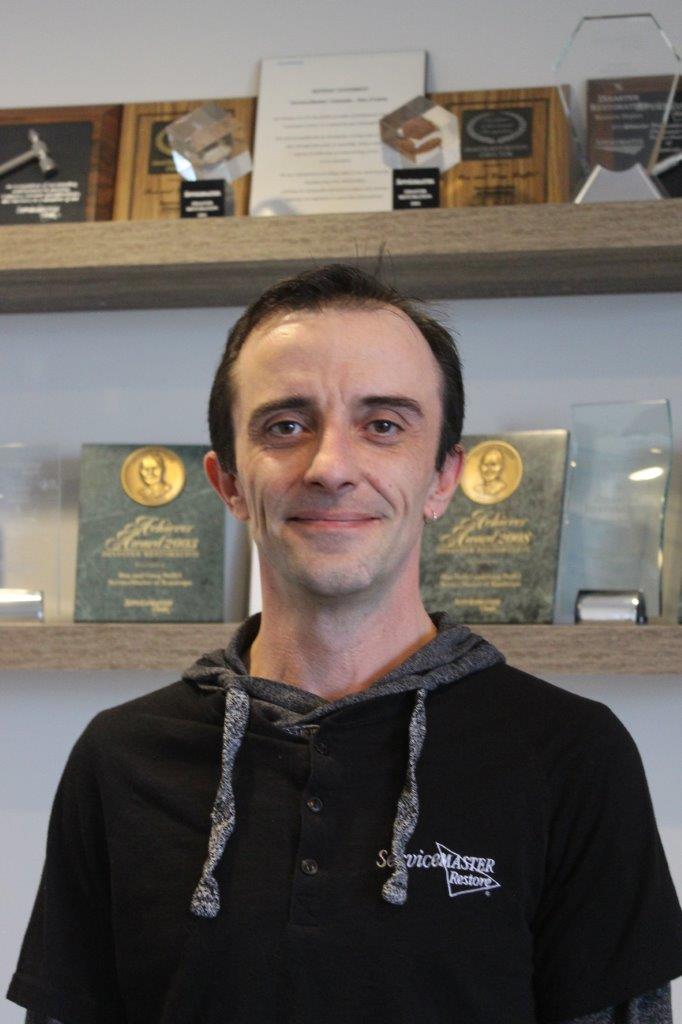 Justin was born and raised in Kamloops and has been with ServiceMaster since 2008. 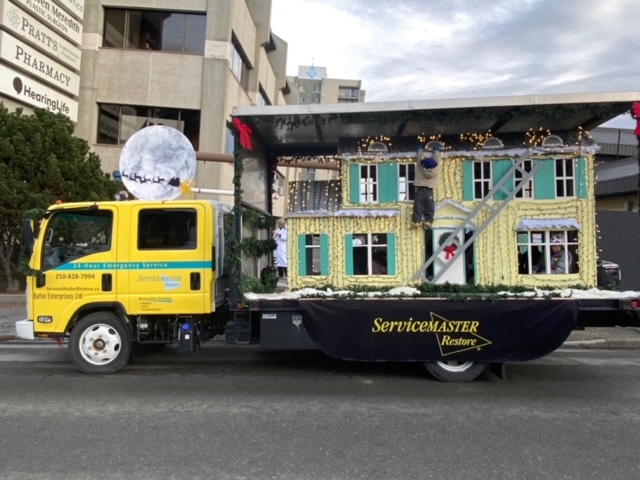 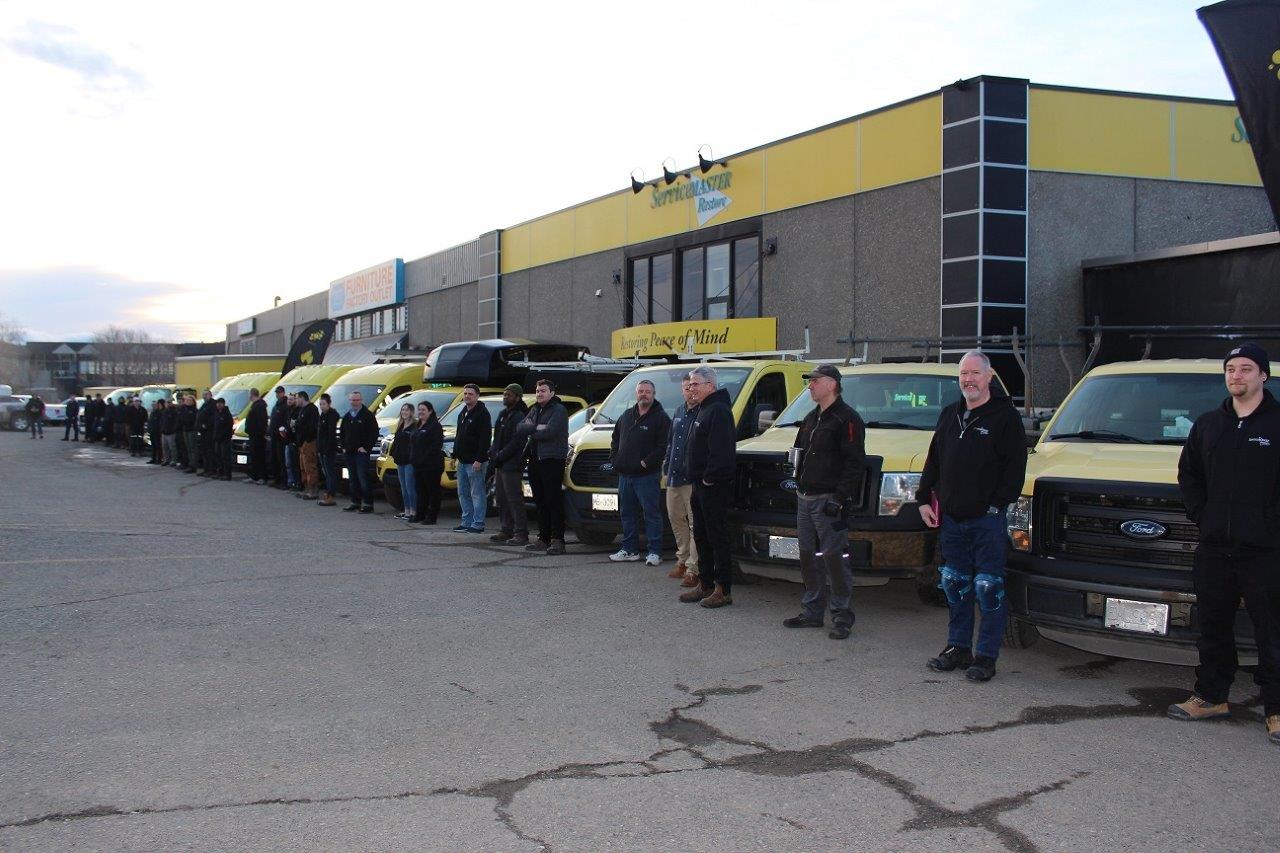 Group shot in front of the fleet before the our first Commercial filming, Spring 2022

"Whether the water, smoke or fire emergency is large or small, we do everything possible to help restore people's lives, homes and businesses to normal. We provide the highest quality technical restoration services available in the industry, but we also respond to the emotional needs of those affected and deliver an exceptional customer service experience."

A national network at your side, and on your side

Whatever the challenge, ServiceMaster Restore brings more than 65 years of experience to every job.  Our national network of 80 locally owned restoration companies enables us to offer the scale of a national company, with the personalized service and guidance of a locally owned business.

"We found the service to be excellent. They took care of everything all we did was pick up the cleaned items they could salvage. They also worked with the insurance company. We had lost our apartment to fire damage and with ServiceMaster we didn't have to worry because between ServiceMaster and the insurance company everything was taken care of. We would most certainly recommend them."  - E. Clarke

"Chris O'Dwyer was awesome as the lead on my job and his trades were professional, on-time, courteous and did a great job. I needed the work done in a very tight time frame and the ServiceMaster team delivered. I couldn't be happier."  - M. Milovick

"Awesome friendly & efficient restoration workers during clean up as well as office staff who treated you and your 'disaster' as top priority." - J. Gibson

"Work was done to my satisfaction and both gentlemen were friendly and explained what they were doing. Work was finished promptly." - C. Huston

"I would like to highly recommend ServiceMaster in Kamloops to anyone needing restoration services; they have the trades on staff so their work is consistently top notch.  They also have the ability to direct their employees to the job when it is most important and timely for them to be there rather than waiting for a trade to be available to them."  Sincerely,  Catherine Churchill

"Your team has made our house look just great, they made an unbearable situation bearable.  Their outgoing, friendly personalities made each visit an enjoyable one."  Thanks again,  Heather and Erik

"Thank you for the exceptional job you have done for us in putting our house back together.  ...You certainly exceeded all of our hopes for how our house would be reconstructed.  The care you took showed us how much you considered is as our special home"  Thanks so much,  Joanne and Graeme